Being a female athlete in Dubai

I climb like a girl, try to keep up!

I was born into an Arab Muslim family with Lebanese origins. We moved to the United Arab Emirates in 2001 and been here till date. When I was growing up, my father was strict and made sure that I followed certain guidelines otherwise he would be upset that would lead me to feel guilty. My mother has been always open minded and very outgoing, she enjoys the company of other people and loves laughing! This created a healthy balance in the family.

I have 2 younger brothers and an older half-sister. My sister didn’t live with us so I was the only girl in my family. With all the guidelines that my father imposed on me, he made sure the same was imposed on my brothers. I did not feel any less than my brothers and truly believed we were all equal.
Just for clarity, the guidelines included extreme curfew, understanding religion, knowing what the limits are, respecting the house rules, being smart and presentable.

The only problem my parents faced with me I believe was my stubbornness. If I believed in something, there would be nothing in the universe that would stop me from not believing in it.

Yet, they still supported me even when I was wrong! As the years passed, this contributed to my personality and helped me shape my confidence in society. I did not care what anybody outside the circle of the family had to say. Opinions of others did not matter at all. The only thing that really mattered was not letting myself down when I aimed at something.

I have always been into sports. It started with bodybuilding and went to running, scuba-diving, skydiving and bunji jumping. I was always in search for adrenaline and was always ready to do anything it took to put myself is these situations. I had the chance to visit Nepal twice when I was still studying at university and I had the chance to fly over the Himalayas and see Everest from the top. That day I promised myself that one day I will stand at the top of the mountain to view the world from the highest point on earth.

Being active has always been a major element in my life until I got engaged at the age of 21. My parents were against the idea as they thought I was too young and had so much more to see in life without being attached to anyone. However, as I mentioned before, if I wanted to do something, nothing would stop me & that’s exactly what happened when I got engaged. I was dating the guy for around a year before he proposed and everything seemed like rainbows and flowers. He showcased the best version of him and  I thought this is it! To give you an idea how society is shaped in where I come from – It was ideal to complete a university degree and get married straight away. This would be a perfect image of a young lady who wants to have a family and be “protected” under a man’s wings. Of course, I was dragged into this ridiculous conception and proceeded.

Months later after the engagement I lost many friend and most importantly my activities! The man I was with would be jealous from anything I could communicate with. Sometimes even my family!

He made sure I stopped scuba-diving because he thought the instructor was into me.

He also made sure I didn’t get to travel alone because it wouldn’t be safe and he would be worried and the list goes on… I felt that I lost myself in that toxic relationship and realized that I didn’t even know what Love really is. So, I took the decision after 6 months into the relationship to leave the guy for good and get back to who I really was.

It was tough at the beginning to go back to where I was because I was starting from 0.

My muscles were weak, my mental health was low and overall, I was down because I did not find anyone around me. But I managed to get through it alone. I started going to the gym 6 days a week and regained all my muscles, I was healthier than ever mentally and I felt I could conquer the world.

One evening, I was attending a seminar at work and it happened that they had invited a motivational speaker. The guy turned out to be a person who has summited Everest and the 7 Summits. I was extremely impressed with his talk and this is where the turning point in my life happened.

I remembered the promise I made myself 5 years ago! I said I would one day climb Everest.

My training shifted to mountain training and I found myself on a plane couple of weeks later heading to the highest mountain in Europe – Mount Elbrus that stands at 5,642m. It was a successful climb and I felt that I was in my complete elements. My energy was properly healed when I came back and this is where I believed that I am truly deeply in love with the mountains!

5 months later after my first summit, I was on the way to the 2ndmountain which is the highest mountain in South America that stand at 6,962m. I was overconfident that I would do amazing and it would be easy, however, it turned out to be the extreme opposite. We had bad weather and were stuck for 5 days on basecamp. We had to rush to the summit with the little days we had so we did not have proper acclimatization. This resulted in being extremely sick due to the lack of oxygen. I was so weak and I had an emotional attack recalling all the negative things. On summit day, I knew I wouldn’t make it yet, I still woke up at 3 am when the temperature was -20, put on all my gear and made a move. At 6,400 meters which was only 550 meters away from the summit I got sick again and lost a tooth. I decided to turn back and try again in the next year. That expedition has taught me so much lessons that I admire the fact that I did not make it.

I came back home and made sure that I was okay. I had to stand strong and not let myself down because I failed but I broke at one point and went back to binge eating and being lazy. 3 months later I decided to join a group to climb the highest mountain in Africa – Kilimanjaro that stands at 5,895 meters. I was physically not ready but I still believed I could do it. It was one of the best experiences in my life, I realized how much “Mind over Matter” is important. My mind was so strong that my fitness level did not matter. I was able to summit the mountain by being passionate and persistent.

My confidence level went up again after collecting a new summit and I started planning my next trip which was the Alps. I did the ‘tour du Mont Blanc’ in 7 days full backpacking and autonomy trip. It tested a lot of my patience and it taught me a lot of survival tips. I also summited Mont Blanc and Mont Blanc du Tacul on that trip. I felt so empowered and strong and knew that collecting summits was the right thing for my energy.

I was so addicted that 2 months later after the Alps I Went to the Himalayas and Climbed 2 mountains which are called 1- Island peak 6,200 meters and Chukkhung Ri 5,500 meters. My energy was flowing, I would be so productive at work when I came back and so creative. I was patient and would think about humanity and peace and try to figure out a way to contribute to the world.

January 2018, I decided to face my fear again. I went back to Aconcagua – The highest mountain in South America. I went humbler and a little scared this time. It was a successful climb and I managed to reach the summit after 18 days of climbing. It was the best summit of my life!
After I came down the mountain I decided to continue to Chile where the highest active volcano that stands at 6,892 meters is located. I thought I would not reach because I was still recovering from Aconcagua. The complete opposite happened! I was tired physically but I was so strong mentally. The weather conditions were extreme and we had a very little time yet I was able to summit. This trip contributed more energy to my energy.

Now I feel like I’m in a game where you collect the gold coins but, in my case, it is simply something intangible! This is why when society asks me : why do you do this to yourself? Why are you suffering? Why do you want to put your life at risk? Why do you climb mountains? My answer is, it is too beautiful that there is no fair way to explain it. It is something you cannot see or touch this is why.

Society sometimes does judge my journey and wonder what my future will be because it does not look typical to them. I always encounter questions like: what kind of a man will you be able to live with?  How are your parents okay with what you are doing? When are you planning to stop?

It is sad that this is what they care about instead of knowing the real things and situations I face on the mountain. Yet, I still do what I think is right and explain my journey and talk about the mountain.

I hope more women in the Arab world get some ideas from my journey and spread their wings to reach to what they really want. At the end of the day we all are humans with a time line and life is too short – so live it wild and fuck what anyone tries to hold you down. 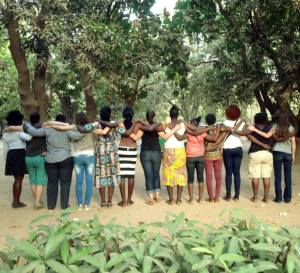